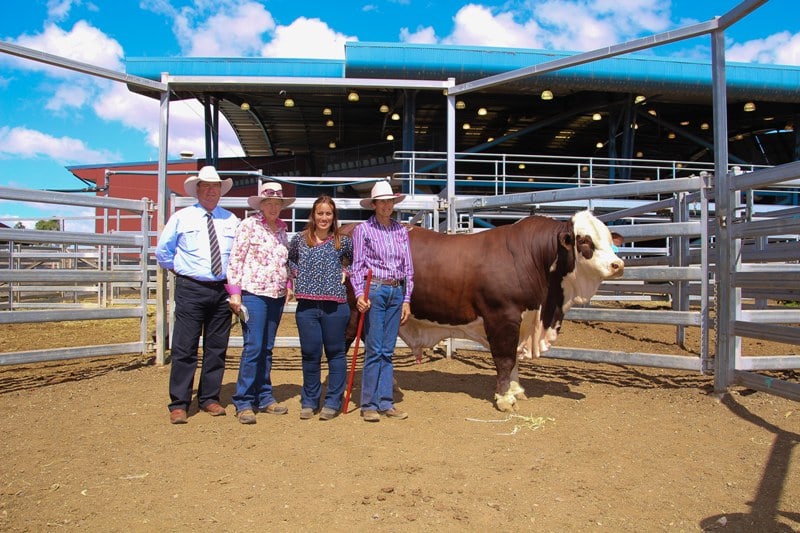 The 2015 Riverina Stock Feeds National Sale was a great result for the Braford breed. 114 bulls sold out of 123 offered for a 94% clearance and very healthy average of $6746.Overall, the sale grossed $769000.The continuing extremely dry conditions in the western and northern parts of the state showed, with only a few bulls selling in to those regions. We had international support from Argentina at this years sale when Magdalina Paris purchased the sale topping lot 119, Carinya Penrith from long time sale vendors, the Amor family for $34000. Earlier, Magdalina had also bought lot 81, Little Valley Warrego for $11000 from NSW vendors, the Bennett family. The Bennett family had a very healthy average of $8062 for their draft of 8 bulls, which included the $10000 lot 82 selling to Tigrigie Cattle Co from Taroom.

Tigrigie Cattle Co were again great supporters of the sale when they purchased 5 bulls and waited to the end to purchase the last 2 bulls, lot 146 for $11000 and lot 147 for $8500 from Jim and Anne Chad’s Donrinda stud at Dubbo.  Donrinda had the last 3 bulls to finish the sale with the 36mth old lot 145, Donrinda Bandanna, selling to Brian and Trinket Anderson of Theodore for $17000. The Andersons also purchased the $21000 Abernethy Whiskers from Malcolm and Sandra Kenny.

Dennis and Shirley Bourke’s  Burradoo stud, claimed 2nd top money of the sale when they sold lot 32, the high content  Burradoo Ringo for $26000 to the Donrinda, CC and Eldon Court studs from NSW. Burradoo also sold lot 33 for $15000 to their long time clients Burnett Enterprises. The Clermont based Burnett Enterprise, put together a top draft of bulls which also included the $16000 Riverton Nero sold on behalf of Larry and Beth Acton.

Commercial buyers were again great supporters and all the vendors would like to them for their continued support. Some of the volume buyers were BA & AM Galloway, Blackwater, who put a floor in the market when they purchased 8 lots. The Price families from Eurobodalla St George and Miegunyah, Dirranbandi, bought 6 bulls and 4 bulls respectively. BJ & CM Anderson, Clermont also put together a line of 4 bulls. Zarpt Farming Co bought 5 bulls for their  Dysart property and JR & MA Murray took home 4 to Richmond. Eureka Grazing from Alpha spent $10500 on Burradoo  Ranger  and $10000 on Carinya  Quilty  amongst their draft of 6 Bulls.

Let’s hope that the rains come to all the drought  ravaged areas and the cattle market remains strong.