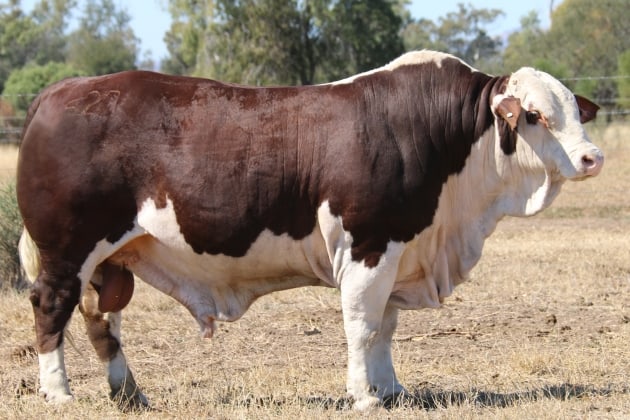 Brafords are doing well in Queensland’s Central Highlands with bull buyers from Rolleston dominating the Ascot Neimen sale in 2017, the studs owned and managed by the Galloway family.

Brafords are doing well in Queensland’s Central Highlands with bull buyers from Rolleston dominating the Ascot Neimen sale in 2017, the studs owned and managed by the Galloway family.

There was plenty of interest in Genius after the stud’s open day where he had showed off his thickness and muscle appeal. New technology and the agents were put to the test, with two bidders competing over the phone plus online bids from those listening via the internet on AuctionsPlus.

Also making a serious investment in Brafords was the Muller Family of ‘Orchid Vale’ at Rolleston who spent $37,000 on four quality sires. That averaged $9,250, including second top priced bull for $12,000, a polled herd bull weighing 876kg and had an EMA of 133.

From Rolleston to further west, with first time buyer Sam Crawford from Julia Creek purchasing five bulls for a gross of $16,500.

AuctionsPlus allowed Geoff Cox from Winton to buy his first Ascot Neimen bull at the click of a button – selecting Neimen Gus for $4,000. As did local buyer Mick Maloney of Theodore.

Dan Galloway said he was very happy with the result from the sale considering the seasonal conditions and also the first time use of AuctionsPlus.

“People find it hard to get away these days and if we can save them a few hours travel, it’s a good thing,” he said.

Bambling and Kenny families both from Gayndah bought bulls to suit their requirements.

Repeat buyers, John Murray from Richmond, Mark Peaghan from Charters Towers and the Weller brothers from Kingaroy all purchased two bulls to fill their orders.

Local buyers from Biloela were the two Graving families, John and Deb from ‘Moscow’ and Evelyn from ‘Kurrajong’ and also first time buyer Kelvin Dreger. Purchasing one bull each were George Stephenson from Moura and Rudi Palinkas from Dingo.

It’s not a Galloway sale without some friendly family bidding from Graham’s nephews, Scott Galloway of Blackwater and James Galloway of Monto both buying two bulls to round out a solid result.